After the success of my first Clash of the Guilds event earlier on in the year, my FLGS decided to run their own, turns out Guildball is pretty popular in my area now and 16 players sold out in a flash. after some smoot talking from a few of us this expanded to 32 and again sold out bloody quick. As a result Festive Balls became the first Guild Ball event in the world to sell 32 tickets 😀

Thankfully I had a rare weekend where I didn’t have to TO an event (These are bloody rare) and I was instead able to take part as a paid up player. Yep I wasn’t even a stand in!

I opted for my favourite team the morticians: 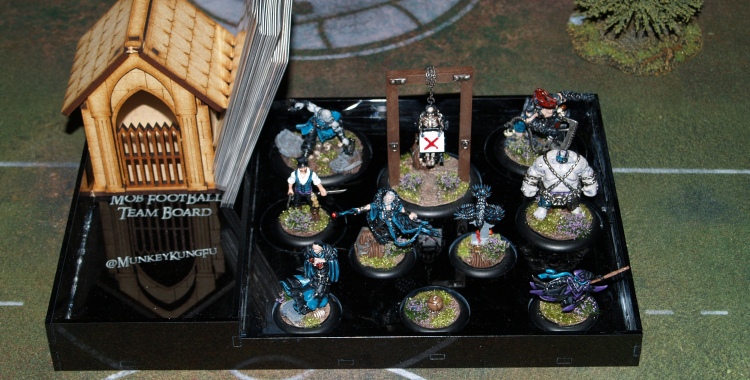 The event followed the regional rules of choosing a roster of 1x Captain, 1x Mascot and 6 players and then choosing a team of 6 for each game. Despite bringing 8 players I managed to play every game with the same 6 as it suited me better based on what was opposite me.

So game 1 and I am up against Jim and his gorgeous looking Brewers. These are so gorgeous that they won best painted! I’ve not been able to play against brewers casually as nobody I know locally actually plays them, however I knew going into this that Stave could cause me some serious issues,. However when the 6 were revealed he was still on the sidelines. Excellent.

Jim won the roll and received, after a cagey start and Jim throwing the ball around I kept obulus back until the final activation so that I could clear out the ball. With a puppet master used on the cat to throw the ball back into the middle. I managed to win initiative and get the ball out to Mist on the side next to some fast ground. Jim tried to meet me in the middle in a fist fight but with Obulus, ghast and fangtooth in the mix he wasn’t able to get anything meaningful through. Tapper got isolated and was left bloody. Jim managed to take out dirge for an early 2-0 lead and I finished the turn by dodging / sprinting up the wing and scoring to make it 4-2. With enough momentum to auto win the next turn I dodged mist in front of goal. The kickoff went out to the same wing where Friday was able to take possession with a perfectly placed kick. It then became the Obulus show. 8 inf got stacked on him with only thought on my mind. 6 MP 1st activation. So Obulus activates first, hits tapper enough times to take him out and generate momentum. I walk him around into position, puppet master Friday to kick the ball, received, dodge through melee zones to get in position to pass to mist, make it and snap shot for a 10-2 lead. Again the ball goes out to Friday who was able to get a goal before I finish off the game smashing the snot out of Hooper

Without remembering all of the details on this game it was an incredibly tight affair. A few things stuck out from this game. Unmasking hurts when it is back on you and I forgot how easily Midas can pull it off in comparison to myself. This lead to Ghast and silence being carted off on Turn 2. Late in the game I made a clinical error in measurement and found obulus half an inch out of range to shoot and in frustration ended turn forgetting to pop his legendary which gave Chris enough momentum to do some crucial healing. I managed to score next turn to make it 10-8 however Chris was able to kick it out to hemlocke and score in response to make it 10-12 so despite some stupid school boy mistakes it was a very close affair.

Covered by Wynter in this thread

So game 4 was against Greg and his union. Lots of high defense and dodge shenanigans. This game started out with me wanting to get on the score sheet as quickly as possible to put Greg on the back foot. however both Mist and Obulus missed a shot on goal in Turn 1. In total I would miss 5 shots in a game that saw me roll atrociously for the first hour and then have my dice go on fire where fangtooth rolls 5 6’s on an attack against snakeskin to take her out! This game was all about fangtooth. Without him I would have lost this game in relatively short order. To finish up the comeback, fangtooth drops his heroic play to charge mist, take him out to then pick up the ball and PASS it, yes PASS to Obulus who then goes on to score a goal to tie it at 10-10. Greg then runs up gutter to try and take out obulus however Ghast was in position to finish things off to win 12-10

My Final round opponent was butchers. with the following models (Ox, princess, boiler, brisket, Shank & Gutter)

I won the toss and elected to receive. With Mist on the pitch, Trev rightfully aimed the ball as far away as possible from her as possible. However this allowed some early momentum building as instead of holding on I was able to pass it around to get it to mist (silence > Obulus > Mist) Conscious of the damage out put on butchers, I was wary, however gutter managed to draw out silence, With Ox being the ringleader I waited for him to activate by baiting him with an easy 2vp Dirge, before striking using Obulus to puppet master him out of position and smash him in the face with Ghast. All the while, Mist moved into position around the right flank to be in position to pounce on a turn 2 score. I did however fail to win initiative on T2 and the game nearly came undone as Ox laid into my loaded Obulus nearly taking him out but not before taking out silence. Obulus weathered the storm as he so frequently does and dealt out his own level of pain, taking out Ox before healing up. This then freed Mist up to score. A game against butchers is always a cagey affair especially nearly 10 hours into gaming and my back pain was stopping me from thinking, boiler, brisket and shank were carving some holes in me. Fangtooth was slightly out of position, however I managed to get him into the action in time and get off the much needed unmasking to clear out gutter, push brisket into melee with ghast and obulus and take out shank.

At this point I’ve built up 8 VP, however i’ve taken a load of damage, thankfully spread out but that in itself leaves lots f people vulnerable and is costly MP wise to fix. I misjudged my distances and gutter came close to taking Obulus out. With some crowding out bonuses on my side I was able to survive only to find myself surrounded by Boiler and princess a well timed don’t touch the hair meant the old man stayed in the game. The turning point came in the final turn when It would come down to who won initiative. Ox had yet to pop legendary and was due to come out and I had a lot of players near to being taken out. I had a 4MP swing and rolled a 1! Bollocks. Thankfully Trev rolled just as badly and I won initiative. It came down to the old man to pull up his sleeves and go for victory! 8 influence, screw the rest. Shadow like movement put me on the edge of my melee range with princess, 3 attacks to farm momentum allowing me to doge out, puppet master Princess to pass the ball to me move into position pass to mist and snap shot to victory. A victory and 2nd Place was mine finishing behind my Round 2 opponent! The score did not reflect how close that game was. Failure to win that initiative roll and I’d have been wrecked, however miss the goal and I have an uphill battle with hardly any influence on the board to react.

So overall I finished in 2nd place, ahead of Oli and his Masons by 2VP but still above him

and I was only outdone by Chris T who was the only player to go undefeated all day. He only gave up 20 VP all day and 10 of those were from me.

On reflection would I have done anything differently? Aside from in game decision no. I am dead chuffed with 2nd place especially as all the practice games I had in the run up were again my friend as I was helping him get up to speed with the game to play in the event. Stand out MVPs of the team are Fangtooth and Obulus. For fangtooth I always loved him before his buff, but glutenous mass excels him so much it’s crazy. Obulus is in a completely different league as well. The things you can do with Obulus on 8 influence are sickening at times and he can be a serious goal scoring machine. Over the course of the day I score 11 goals, of which 6 were scored by Obulus and 5 by Mist