With the release of The new D-Day compilation, the fine chaps over on WWPD (What Would Patton Do) have launched “Operation Overlord” A Normandy based campaign. Whilst the campaign officially does not start until Sunday, myself and Sam decided to start early with a para drop mission on the eve battle.

Apologies in advance for the ‘special’ levels of tactics involved, but his has been about a month since either myself or Sam have played so suffice to say we are rusty.

We played a small points game with just over 1,000pts a side using the Seize and Hold Scenario from the Normandy Battles supplement. This mission has Sam making a night drop in an attempt to capture key assets ahead of the overall beach invasion. Myself. I have to kill them all or drive them off. 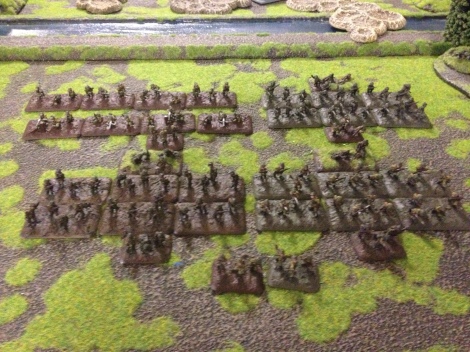 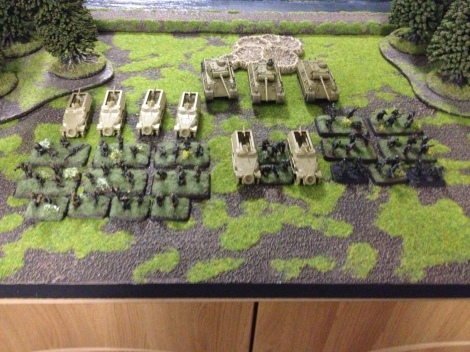 With both my Panthers and my mobile grenadier platoon held in reserves I deployed my small platoon and 2iC in the middle field to allow them to sufficiently cover both objectives. As part of the scenario they began pinned down and dug in.

Sam held Rifle Platoon 2 & 3 in reserve, his MG platoon and Rifle Platoon 1 with 1iC would come on from the bottom right corner where their pathfinder was positioned.

With no reserves coming, Sam began by moving on his MG platoon into the woods and Rifle company 1 towards the bridge. Thanks to his specialist training he was able to ignore the no double movement penalties. 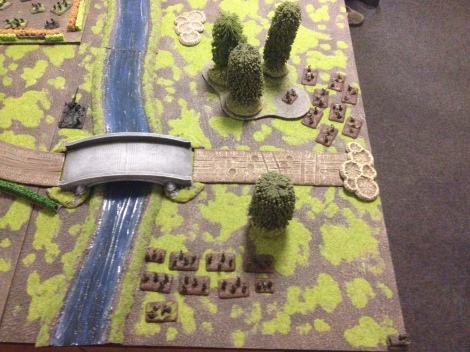 My turn began with my Panthers coming in from scattered reserve directly in front of the MG platoon, the Grenadiers unpinned and stayed put happy to remain camped under the stars drinking coffee. The panthers turned their focus straight onto the MG platoon mowing down 2 bases in a hail of MG fire. They swiftly followed up by assaulting the 2 closest bases and killing them both. The MGs broke off and ran away. 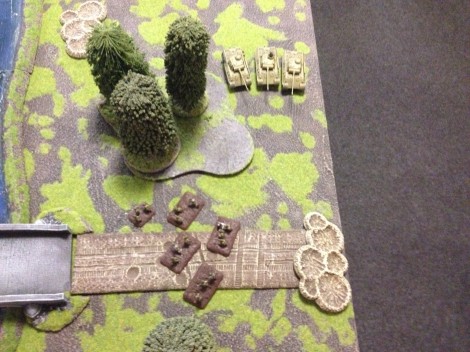 Turn 2 started with Sam failing to get any reserves arrive, the MGs remained pinned and went to ground. The Rifle platoon moved up to support the MG platoon and try to stop them being overun

Turn 2 begins in the same lucky light as turn 1 as my last set of reserve arrive alongside my Panthers. The Half tracks unload the MG bases, platoon commander and 1iC in front of them whilst the Panthers begin to peel around the trees. The grenadiers open fire on the rifle platoon and despite scoring many hits only 2 bases are killed, the riflemen however are pinned.

Finally Sam receives some reserves in the form of Rifle Platoon 2, who happen to drop right where the action is. Rifle platoon 1 manage to unpin but the MG platoon remained pinned and retreated back slightly. Sam shoots both platoons at the grenadiers pinning them without causing any casualties, miraculously all bazookas miss the half tracks. Feeling lucky sam attempts to charge the grenadiers and drive them off with both Rifle platoons, however resilient defensive fire drives both charges off, causing 4 kills on Rifle Platoon 1. They force a moral test but the platoon passes.

I begin my turn by unpinning and putting out as many shots as possible on the 2 rifle platoon, the grenadiers succeed in wiping out Rifle platoon 1. The Panthers move up round the trees and guns down another MG base. The platoon fails their morale test but the 1iC joins and restores order.

Things are looking desperate for Sam as Rifle Platoon 3 turns up amidst the carnage. Again the fire-power manages to pin down the grenadiers and again the bazookas miss everything in site. He attempts a final flurry of charges but the defensive fire is too much and 3 bases die from Platoon 2 and 4 from platoon 3

Seeing the end in site the Germans unleash all their fire-power on the remaining squads. The Panthers move up and kill off the remaining MG bases leaving only the commander. The Grenadiers focus on Platoon 2 killing 3 bases and forcing a morale test. The platoon fail and despite the best efforts of the 1iC they run. The half tracks aim at the 3rd platoon and manage to kill 1 base

With all his comrades dead a lone bazooka tries to take out a Panther to at least cause some damage for all the American lives lost. Another miss and the remaining forces are killed off in return Panther fire.

Overall an enjoyable game given it has been a while since we have both played and some very questionable tactical decisions made on both sides throughout. But the Germans were victorious and claim first blood. We shall revisit our battle in a few weeks time once the Americans have managed to get some much needed reinforcements.